Yes, this is ‘the other stuff’ I’ve been busy with the past month, helping write a stage show for Hossan Leong, who is Singapore’s funniest man, and I’m not saying that because he’s my best friend, but he’s really really funny, because he can make people laugh by repeating the same jokes I’ve told, and which didn’t make people laugh.

Many of the things he tells that people laugh at come from personal experience, which when I tell them, people just shake their heads and say ‘wah lao, you damn loser, man’.

Like the time when we were sixteen and went to our first club, unfashionably early, so early that only elevator music was playing, which we thought was the ‘actual music’ that we were supposed to dance to, and so, we danced. We stopped momentarily when the ‘actual music’ was put on by the inscrutable DJ, only god knows what he was thinking, complete with strobe lights and all. Then we continued dancing.

They say it’s all in the delivery, and I suppose Hossan has that in abundance, while for me, even the mee pok hawker reminds me, “è‡ªå·±æ‹¿, hor?” (please deliver it yourself to your numbered table kind sir because I can’t be arsed with you) when I order lunch.

I’ve watched Hossan perform for decades (ok lah, not so old – a decade), and he never fails to crack me up, even if I’ve heard the jokes a hundred times before, at rehearsals, and when we’re just, well, kidding around.

Attached to this post is the 40 second radio ad which we recorded at Power 98. Yes, it is very short. So if you want to hear (and see) more, please go get your tickets now! The show, ‘Hossan – Multiple Personalities Disorder‘, runs from Jan 31 – Feb 4.

There are early bird specials if you buy before the year ends! Faster quick hurry go buy tickets now! Thank you! 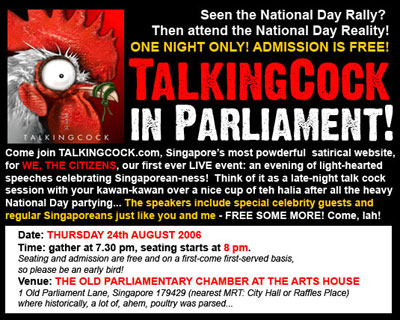 Join us in Parliament. One night only. (You think they’d let us stay any longer? Siao!)