Some nights I sit at my desk trying to type up something for an article, or looking for nonsense news online, I turn and see Jake lying on the chair behind me. He’s pretty content to sleep near me most days, and he’s been a real sweetie with everyone lately. And that has probably got nothing to do with the fact that he recently destroyed his fifth full toilet roll when I forgot to close the bathroom door. That’s for when your head’s still spinning from discovering that your friendly neighbourhood 7-Eleven, which is supposed to be open 24 hours – wasn’t one of their taglines ‘always close but never closed’? – isn’t open 24 hours: *Interestingly, while looking up hyperlinks for this post, I found out that 7-Eleven Singapore “has four proprietary products – Big Gulp, Slurpee, Mr Softee soft serve ice cream and Quickbites”, which, if I take the meaning of that correctly, means that those things are owned by the Singapore franchise, and which explains why I couldn’t find Slurpees in other countries (unless I didn’t look hard enough, which is also possible, because I couldn’t have possibly been hankering for a Slurpee in another country’s 7-Eleven, could I? No, I don’t think so).

No it’s not pissing down, it’s a performance.

A couple of ‘landmarks’ bid good bye this week – the National Stadium, which I dare say has more sentimental value than the other ‘landmark’, the Musical Fountain on Sentosa, Singapore’s Last Resort Island.

Odd, but hey, it’s Singapore and weirder things have happened.

Channelnewsasia reported of the National Stadium that:

“The National Stadium – home to 18 National Day Parades, scores of national games and the Kallang Wave – will be demolished later this year to make way for the Sports Hub.” 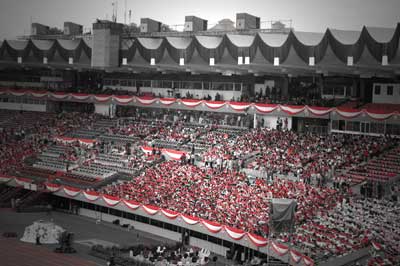 Vale, National Stadium! And, um, yeah, Musical Fountain. Um… you shall be missed? But if broken, thumb considered sold I discovered, via SMH, this useful guide to airline cabin seating for many airlines. Tells you which seats to avoid on which aircraft types on which airlines. Useful only if you travel a lot lah. Which I don’t. But nice to know these things anyway, y’know?